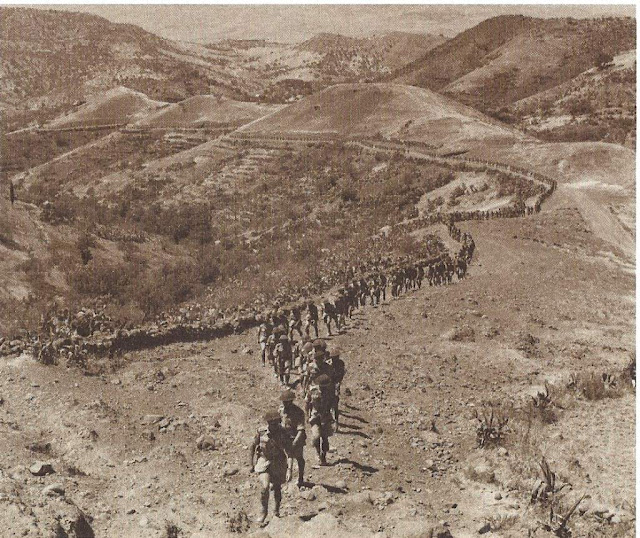 The Royal Canadian Regiment (The RCR) climbing hills in Sicily

Here are another two days of entries following Sherry Atkinson's through Sicily for the 70th Anniversary of Operation HUSKY the Allied invasion.  Sherry was the Anti-Tank platoon commander for The Royal Canadian Regiment (The RCR) which was part of the 1st Canadian Brigade and in turn the 1st Canadian Division.  The journal entries are written by Sherry's wife Susan Atkinson. 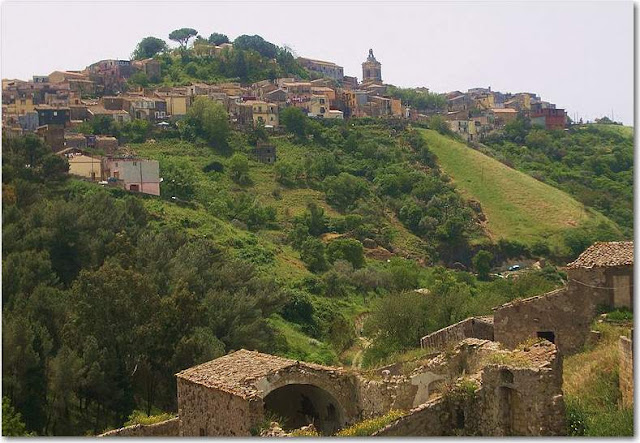 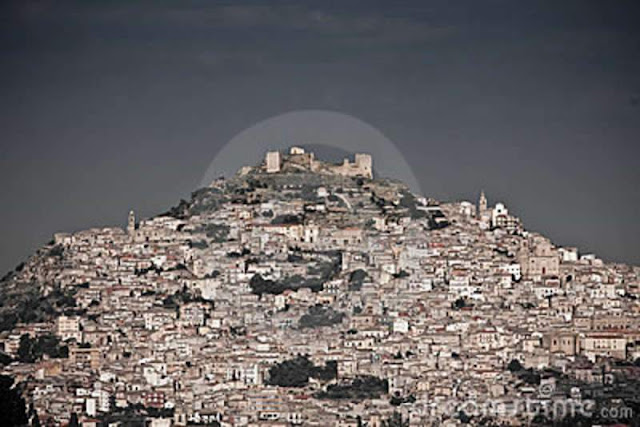 The town of Agira and Nissoria was where Sherry was wounded by a German 88 and where the Commanding Officer Lt Col Ralph Crowe was killed on 24 July 1943.  As you can see from the picture of the Agira Canadian War Cemetery there are many Canadians buried there.

Here are another two days of entries following Sherry Atkinson's through Sicily for the 70th Anniversary of Operation HUSKY the Allied invasion.  Sherry was the Anti-Tank platoon commander for The Royal Canadian Regiment (The RCR) which was part of the 1st Canadian Brigade and in turn the 1st Canadian Division.  The journal entries are written by Sherry's wife Susan Atkinson. 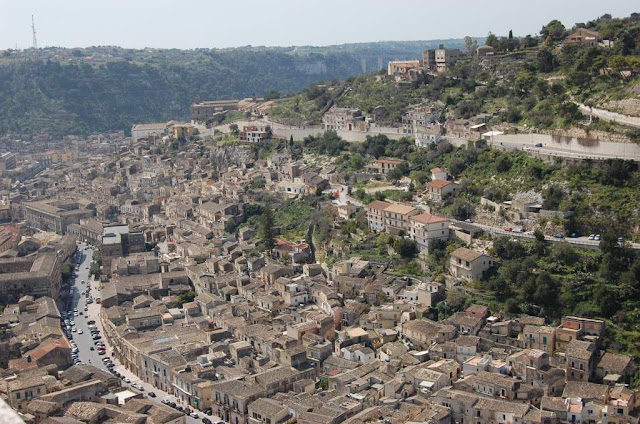 July 11, 2013
Today was a day off.  We all slept in, and enjoyed a very late and wonderful breakfast. Took a few photos around the Villa.  Showers, laundry and transcribing photos kept us busy until about 2 in the afternoon.  We then drove into Piazza Armerina, and all enjoyed large gelatos for our lunch.  We took some photos from the old fort atop a hill, across from the cathedral.  Following this indulgence, we toured the Villa Romana del Casale, a restored wonder of ancient ceramics from the late third century.  The mosaics were buried under a mudslide, and protected for centuries.  In 1997 the site was named a UNESCO world heritage site, and is well worth the visit.  Unfortunately, we could not use our cameras there, so you'll have to visit here to see for your selfes.

Tonight we will find an interesting place for dinner, and try for a reasonable bed time.  Tomorrow morning we will have breakfast at 7:30 am and leave here about 8:15 to attend the Ceremonies in Modica, which is the town Sherry was responsible for liberating on July 12, 1943.

Before Market Garden and Overlord there was Op HUSKY!

This year marks the 70th anniversary of the Allied invasion of Sicily, the invasion took place on 10 Jul 1943 .  This was D-day before D-day happened in Normandy and marked the first time allied troops were back in Europe.  As part of the celebrations The Royal Canadian Regiment sent one of the few remaining veterans Sherry Atkinson, the Anti-Tank Platoon Commander, to take part in the celebrations.  He and his wife have been sending pictures and journal entries chronicling their journey to the serving members of The Regiment.  I know that a lot of you guys are interested in the history that surrounds the game and figured I would share this with you too.  So I can't take any credit for this just passing it along in the name of history. 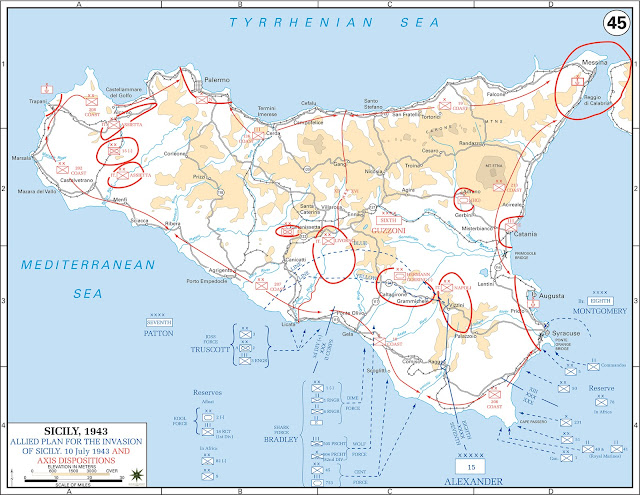 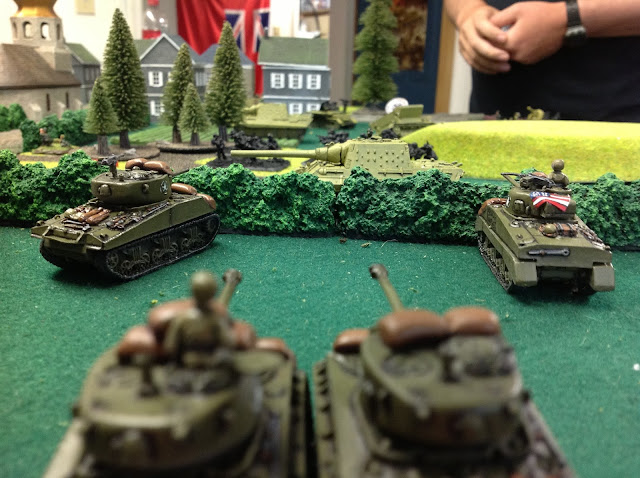 Shermans draw a bead on a JagdTiger

In celebration of the final day of the Overlord campaign Dan and I got a game in.  Unfortunately it wasn't from the new books but from Nuts with 1780 pts of my US Paratroopers going against his JagdTiger Company.  But that didn't stop us playing a game for St-Lo where the Red Skull was using some of his Hydra weapons against the Yanks!  We wanted something that was like the counter attacking Germans trying to push through the Airborne who were attempting to hold them up.  We rolled Fighting Withdrawal which I think worked perfectly.  I had my list with Cap 2 x Paratrooper platoons, 1 x MG platoon, Shermans Cav Recon, 2 x M18s and 3 x 105mm with P-47 support.  Dan was running with 3 x JadgTigers, 2 x assault rifle faust platoons, 4 x 10.5cm guns and2 x self-propelled AA guns. 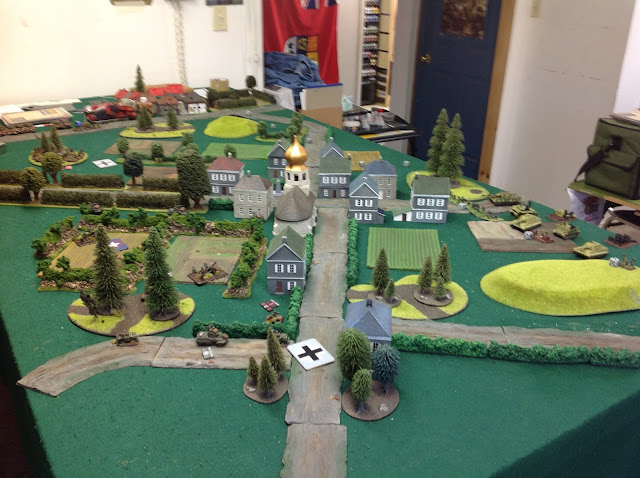 Objectives are at the intersection, in the Bocage and in the distant left by the woods

US Paras vs Hungarian Infantry in Counterattack 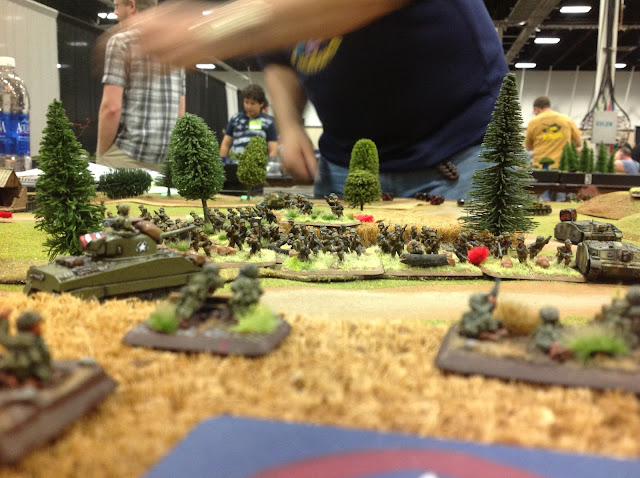 Game 4 of the LW Nationals event in Fredericksberg was against Leo and his Hungarian Infantry.  He had 2 big infantry platoons with a pioneer platoon.  3 of the break through assault guns, a platoon of 3 PaK 40s, an HMG platoon, some light recce tanks, some light AA gunes and a battery of heavy guns supported by sporadic air.  You can see some great shots at Battlefronts own website here.   My 1780 pts were spent on 2 Para platoons, MG platoon, Shermans platoon, Cav Recce, 3 x 105mm guns and 2 x M18s supported by Limited air support from P-47s. 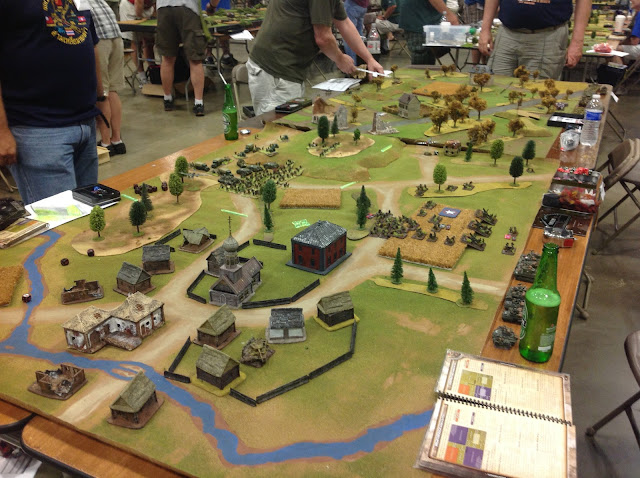 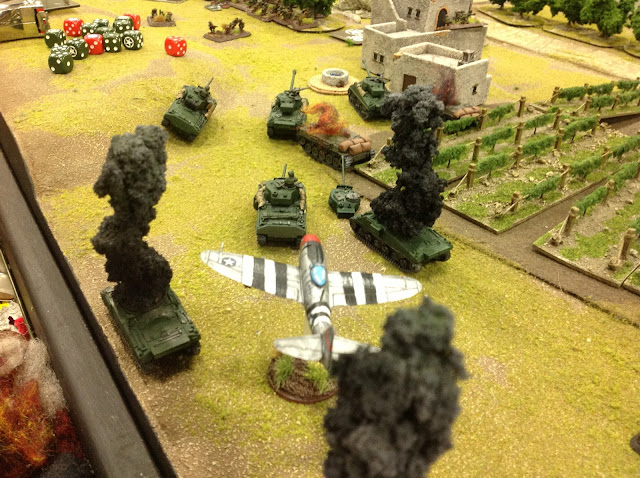 Smoking Shermans as far as the eye can see

Game 2 was against Henry who was running 101st Airborne.  His LW Nationals list was 2 Para platoons, 6 x 105mm, 3 x 105mm, 2 platoons of guards Shermans with 2 fireflies and 4 armoured recon jeeps.  I had 2 full para platoons, para MG platoon, Sherman platoon, 105mm platoon, Cav Recon and M18s.  The mission was Cauldron and Henry was going to have the difficult task of digging me out. 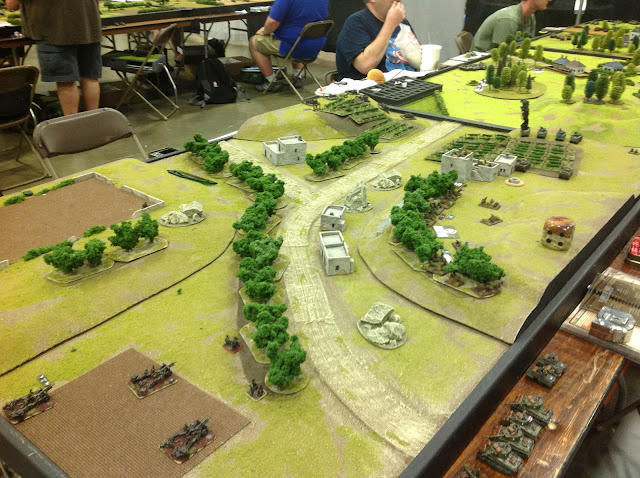 82nd dug in the trees with TDs protecting the flank